We Will Raise Your
Brow Game 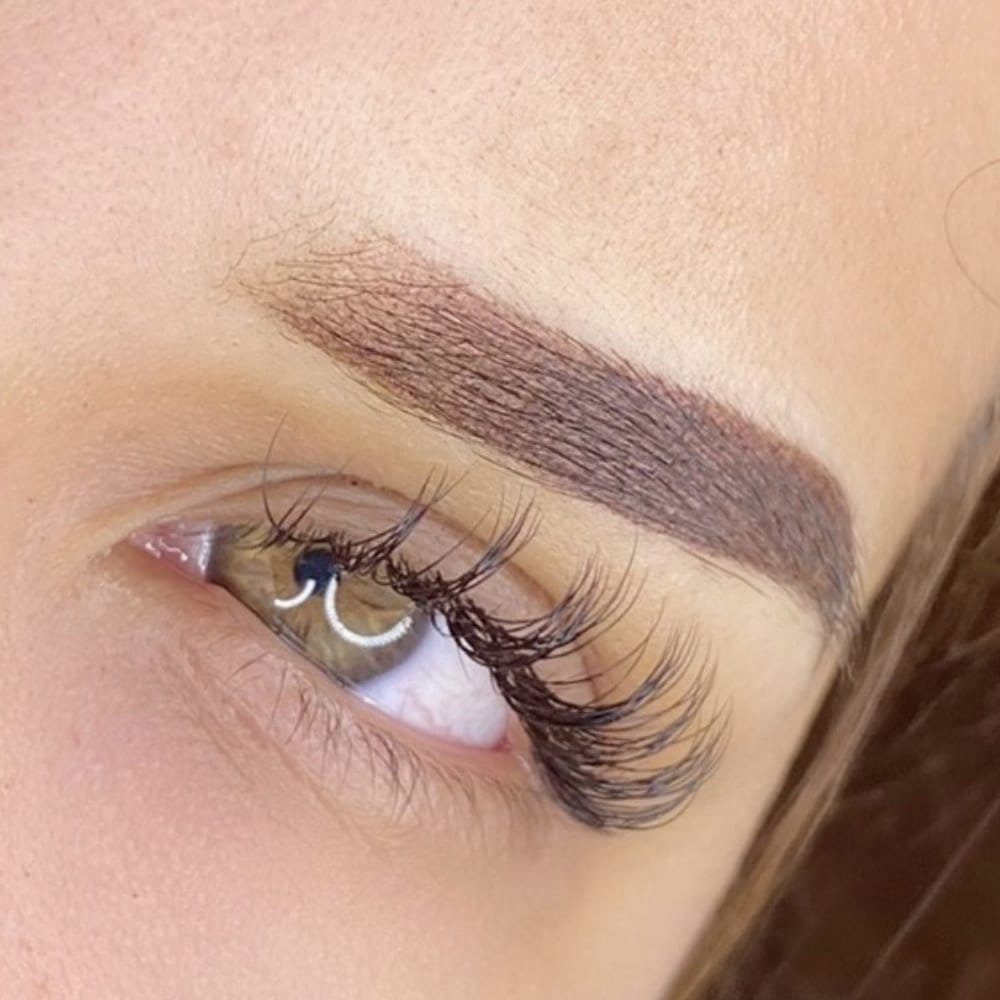 These are the studio favorite!  The Brow Babes like to ensure our clients are informed about their permanent makeup decisions and this is HANDS DOWN our favorite! This is our favorite service for numerous reasons including longevity, skin health, suitability for all skin types, and initial healed results are more consistent. Powder brow/Microshading uses modern tattooing techniques to implant pigment into your skin, creating a soft powdery finish that looks like makeup. They are fully customizable– from a soft powdery finish to ultra-defined pomade-style brows. We can even add a few hair strokes at the front to get you a softer overall finish! The effects will be waterproof, smudge-proof, and completely realistic. It lasts longer than Microblading, typically around 2 years on average, depending on the client’s skin type, lifestyle, and various other factors. Over time, pigment fades leaving the skin and your natural brows behind. A Touch-Up is recommended. 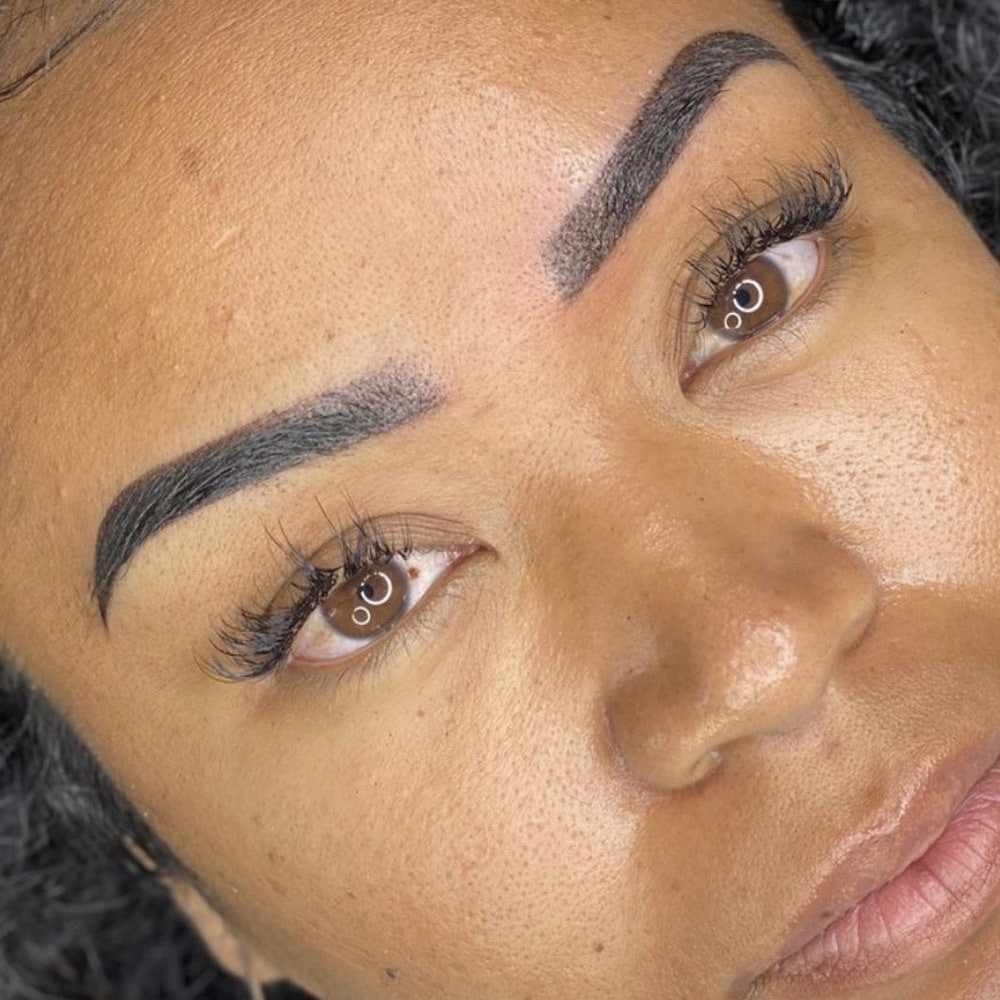 Who is a Good Candidate for Ombre Brows?

In most cases, powder ombre brows are an even better option than microblading, for example, for people with oily skin, large pores, or alopecia, little to no brow hair, sun damaged or freckled skin. as these characteristics tend to be problematic for drawing microblading strokes. Also, they’re more suitable for people who spend a lot of time in the sun, as sunlight can make microblading strokes fade unevenly.

Some of Our Work

ALL Permanent Makeup is a multiple-step appointment process. For best results, clients must complete the touch up AKA Perfecting Session. This session will take place approximately 6-8 weeks after the initial procedure to perfect the shape, color, and density of the area.

Microshading is a form of cosmetic eyebrow tattoo that gives your brows a soft shadowy effect, similar to the look of wearing a brow powder. It fills in any sparse patches and gives the brow volume and thickness, plus it can modify its shape to best suit your features. As a result, a powdery eyebrow effect is achieved, and misty, powdered brows are created. The technique is similar to microshading, but the results are more dramatic.

The whole powder brows procedure resembles the procedure of microblading, but the technique used is different, and so is the final outcome. Keep reading to find out what’s the difference between powder brows and microblading. The whole procedure is a two-step process, and it consists of the initial insertion of the pigment and the touch-up that takes place 6 – 8 weeks after the initial procedure. Powder brows create the desired fullness of your eyebrows in a bespoke arch shape that best suits your facial features and brings out your natural beauty.

What are Ombre Brows?

If you’ve decided microblading isn’t quite what you’re looking for, or you have particularly oily skin and your artist has advised you to go for machine shading instead, powder brows offer several patterns to choose from. One of them is ombre eyebrows. Ombre eyebrows have emerged as a very sought-after procedure. What are ombre brows, who are they for, and what is so special about them?

Inspired by the ombre hair trend, ombre brows (or ombré eyebrows) have become a huge trend in semi-permanent makeup for eyebrows. Just like the basic powder brows, it’s a procedure that gives you the look of filled-in, shaded brows, but with a special twist – the ombre effect.

All semi-permanent makeup procedures imply injecting pigments of natural origin between the upper and the middle layer of the skin, and the same goes for powder ombre brows. The pigment is inserted using a dotting technique called pixelization, giving a 3D, fluffy look to the eyebrows. The procedure is done using a machine specially designed for permanent makeup by a trained and licensed permanent makeup artist and has two steps: the initial pigmentation, and the touch-up after 6 to 8 weeks.

The powder ombre brow effect is easily recognized by the color gradation that starts at the beginning of the brow arch – known as the head of the brow – in the center of the forehead and gets gradually darker towards the tail. This creates an illusion of fading. Ombre powder brows are a subcategory of powder brows and are basically just a particular shading pattern there are 3 different styles we do here at the studio dark to light from tail to front, dark to light from bottom to top, same color throughout the brow

What Is the Difference Between Microblading and Powder Brows?

Even though the two procedures are somewhat similar, that is, both involve the artist inserting the pigment into the surface layers of your skin, the technique used is different, as well as the result, which is the biggest difference between powder brows and microblading.

Yes, microshading and powder brows are very similar and the line between them is thin. So many artists consider them to be one and the same. However, there are a few differences. The biggest one is that microshading often includes hair strokes, too, while powder brows do not. Powder brows are only done with a PMU machine, while microshading can also be done manually, for a softer effect. Powder brows can only be done by artists certified for that, while manual shading can be performed by microblading artists, too. Another difference is in the results. In the right artist hands you can get any look you chose you just have to ask  & be willing to work together.

Do you offer Financing?

Yes! Financing options are available for our services, including Ombre Powder Brows, and other cosmetic pigmentation solutions. There are three financing solutions you can choose from, click here to learn more.